Notes on the Recipes

While I do pride myself on being a fairly good photographer, I haven’t the patience when it comes to photographing food. The more time I spend taking a picture, the less time I spend eating which is a dichotomy to say the least. As a result, you’ll notice that my food photographs are rough and ready.

When it comes to plating up food, again, so long as it doesn’t look like a dogs dinner, who cares? A sprig of parsley; no thanks – it means I’ve got to add an extra step when plating up and then again while eating (to remove the parsley). If it adds to the meal (such as coriander floating gracefully in a bowl of delicious hot chicken broth – yum) then I say go for it, but if it’s to add a bit of green or sparkle to a plain dish, then who cares.

You’ll also note that I’m not big on weights / volumes of ingredients. Unless exact quantities are required, what’s the point? A little bit of this, a little bit of what you love, a lot of chilli for you.

Ummm, well I’m against it in general just like I am religion, third world debt, most political leaders and any reality TV. However that’s not to say I eat meat or fish every night. Often I only eat it two or three times a week. My mother had a heart condition when she was in her 60s after a life of almost being a vegan. No meat, no fish, no egg, didn’t really help her much.

While I think that a lot of the most recent trends in recipe books (think hearty broths, butter, lard) are a bit bunkum, there’s nothing wrong with leaving fat on a slab of beef, roasting pots in the left over fat or some goose fat. Just so long as it’s not every day. Cut the fat out if you need to go on a diet, leave it in if you have a healthy lifestyle.

Where possible, re-use the fat. If you have a bit of bacon, fry it off to render the fat down before frying the next ingredient such as mushrooms or egg for a quick omelet. Yes, I know you’re not getting rid of the fat, but neither are you adding unnecessary oil.

I used to think Global Knives were great, until I had one literally snap in in half (the blade from the handle) while I was cutting up a pastry. Their lifetime guarantee didn’t cover the damage, but they offered me a new one for £15, which I begrudgingly took. 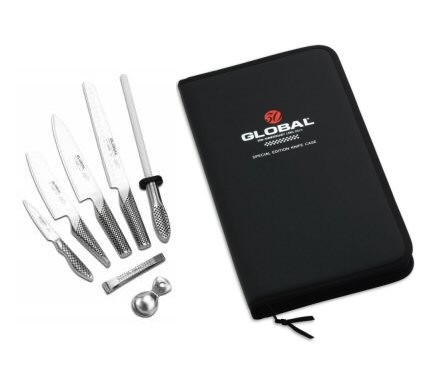 Also, being Japanese in design (if not manufacturing anymore) they need a specific type of sharpener as the knife edge angle is 11.5 degrees compared to western knives which are 20 degrees.

Most knives over £50 will be good enough to use for a lifetime (of the knife anyway). Keep them sharp! The most dangerous thing in a kitchen is a blunt knife (according to Antony Bordein). However a blunt knife won’t slice your finger off before your central nervous system has time to react, a sharp knife will; You’ll be seeing blood splurt in all directions before you’re aware of the pain.

Hi, my not so secret pseudonym is Itsallgonepearshaped and this is my blog. I live in London and love Photography, Travel, Food and Tech. I aim to write for the everyman and I promise there will be no hipster beards here when I finish with this site.